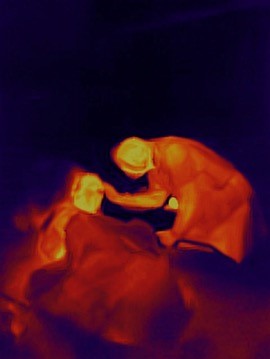 
Antoine d’Agata was born in Marseille in 1961 and was strongly influenced by the Situationist International movement. Many of his works emphasize the importance of engagement. He forms relationships with the people and the communities who are his photographic subjects. These cohabitations are often long-term which is why his work takes time. He travels around the world, working simultaneously on different projects. His compilations of photographs and video works have been published, screened, and exhibited all over the world.
He began shooting for Virus around March 17th of 2020 when the French government announced lockdowns in response to the COVID-19 pandemic. The shooting continued for almost two months until the middle of May of the same year. In addition to Paris, he also shot at hospitals in several other cities, including Taverny and Marseille. The series juxtaposes photographs of city streets and the inside of hospitals which captures the pandemic that rages both outside and inside. In the empty city streets, isolated individuals and the homeless loiter at a loss of what to do, and in intensive care units, patients lay helplessly. People, environments, and buildings are all deprived of their details and reduced to a color spectrum of red and orange as the photos are taken with a thermal camera that capture the temperature distributions. These colors reveal the presence of the virus and highlight our coexistence with it. d’Agata arrived at using a thermal camera to capture the presence of the virus.
This exhibition of his series is the first in Japan.
It is in collaboration with the Yebisu International Festival for Art & Alternative Visions 2022.